This weekend I attempted to make my dear friend Rebecca’s Egg Rolls.

Ah but these are not the Chinese egg rolls that you find in your local restaurant. No, sir, these are Filipino egg rolls (also known as lumpia) and there is a difference.

Second, they are much thinner, making them even more crispy and just yummy.

The first time they ever introduced me to the world of Filipino egg rolls was December 1996 at Rebecca and her young, charming husband Bernie’s (he made me say that) annual Christmas Party.
They were so good that I think I even shoved some in my purse for later.
I mean, it was Rebecca’s mistake making these for that party because for the past 15 years we have been kinda pesky about said egg rolls.

“Rebecca, would you mind making these for Anna’s birthday party?”

“Umm, Rebecca could you just center my entire bridal shower AROUND the egg rolls?”
“Uhhhh, can I have some for a birthday present?”

In fact, I have two pictures of Rebecca at events making the notorious egg rolls:

In fact, she also hosted baby shower #1, but it turned out to be a brunch shower.
Probably to get out of me asking for egg rolls, more than likely.

In 2006, Rebecca sat me and my mom down and taught us how to make our own egg rolls in my kitchen. It was so much fun, but I think we spent too much time laughing and talking because I didn’t remember how to make them afterward, even with the recipe.

So this past weekend I tackled the egg roll issue at hand and destroy make them myself.

After cooking the meat and veggies (I prepped them the day before so they would be cold to add, but that isn’t necessary to the recipe), I lined up the meat in the spring roll wrapper. 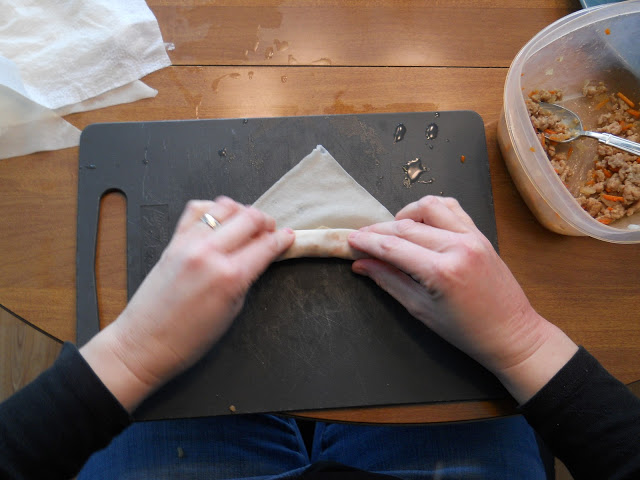 And rolled the egg rolls up… 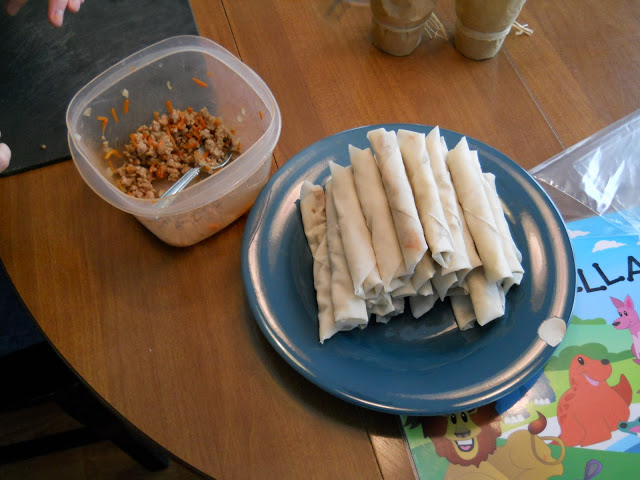 And here is the finished product before frying!
And here they are, all fried and ready to eat.

Ignore the tiny picture, I lost photos in the blog migration last year. Just go with it.
I am so proud of myself for attempting this! I have always loved to cook but I would call myself a cautious cook meaning I don’t always try new things but the things I do cook are good and tried/true recipes. I think if you cook every day of the week (like me), you tend not to try new things because you are tired of cooking at the end of the week.
One of my new year’s resolutions was to try a new dish once a month.
So I think I am off to a splendid start in 2011!

But I think I may still have to ask Rebecca for my birthday egg rolls…..nobody does it better than her.