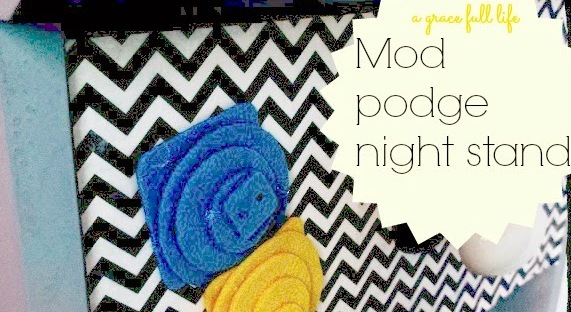 “Designer chic” might be too hoity toity of a description but when I show you the before and after, you are gonna be impressed.

With me.
And my mad skills.

And the best part?
This is something each one of you out there could soooo do yourself.
All you need is a piece of furniture you want to renovate, some mod podge, 25 cent scrapbook paper, a new knob from Hobby Lobby and some spray paint.

My oldest daughter and I are soul mates.
She has the same childhood fears I had.
She loves the same foods I do.
She loves bad reality TV like I do.
And she loves a good sale.
She, at age 12, will price compare while shopping for clothes.
SOUL.MATE.

She is my favorite garage sale-ing person.
Because she is not afraid to talk me out of things I do not need.

Like this cool fuchsia dress I had my eye on.
“mom, puhleeze..that will make you look like a circus clown”

Or that really fun antelope head for only 10 dollars!!
“mom, puhleeze…people will stop talking to you if you put that in your house”

Friends won’t give you that brutal honesty.
Case in point, a cool sundress that I bought for a recent party.
I tried it on in front of my friend Rebecca and she and I both agreed that I looked pretty awesome in said dress.
When I got to the party?
The first comment?
Someone thought I was pregnant.
My 12-year-old said to me later, “if you had tried it on in front of me, I woulda told ya you looked pregnant in it.”
Brutal. Honesty.

So we were at a garage sale in our neighborhood in June and found this nightstand:

My garage pictures are destined for National Geographic.
In that they are just so amazing.
See the clarity?
The shadows?
The depth??
It was just a basic white night stand.
We got it for three bucks, hauled it to the car and drove away happy.
Then it sat in our garage for six weeks.
It actually became a catch all in our garage for things like but not limited to:
sprinklers, sparklers, random nuts and bolts, pieces of paper, Popsicle sticks, Barbie dolls, bottled waters, old tissues, spare change.
My oldest was going away for a week and I had a plan.
I was going to make this little nightstand into something beautiful.
A little like the fuchsia dress but a lot less like the antelope head.
A little spray paint.
Winter Gray by Rustoleum.
I got two cans but only one was needed.

I sprayed the nightstand minus the drawer with the Winter Gray.
I ended up giving it about three coats.
Meanwhile, inside the house I was working on doing something fun for the drawer.
Here it is before:

I took some chevron scrapbook paper that I got at Hobby Lobby for 25 cents on sale.
I love chevron, by the way.
I know its trendy now but I do love it so much and I thought it would be perfect for my tween’s room.
Not too girly but really cool.
I folded the paper to fit the drawer:

And as you can see, it wasn’t wide enough.
But that’s okay.
I used another sheet I had and cut it to size and tried to match it up as best I could.
So get out some Mod Podge.

Then spread a thick layer onto the drawer itself.

Then lay the paper on the drawer and spread a thick layer or two of mod podge onto the paper.

And it will look like this when you are done:

While it was still wet, I took a screwdriver and poked a hole through the paper for where the knob would go.
Look at me being all crafty and junk!!

By the way, as usual I like to show you the real side of my blog.
This was what was going on in the background: 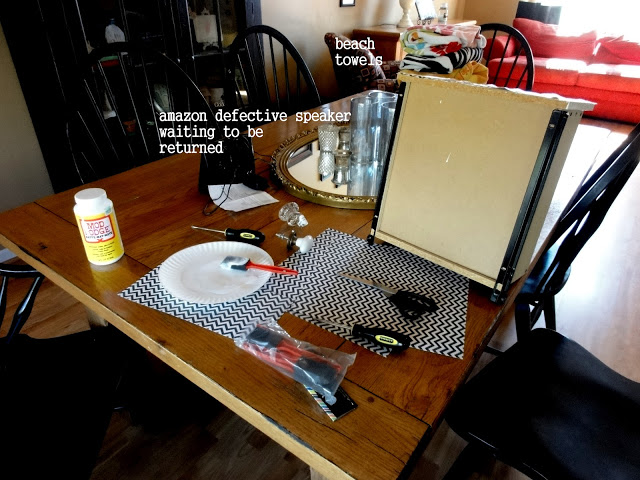 It’s still a hot steamin’ mess.
But that’s okay!
See, when you spray paint furniture it will look like a graffiti artist got to it first.
But after a few more coats, this baby was looking good.
Also, it was 100 degrees outside when I was doing this.
Nothing says stupidity as a woman sitting in 100 degree heat spray painting away.
I love how things that are random just come together.
I got these felt buttons at Hob Lob the same day I got my mod podge.
I loved them so much and at $2.99 less 40 % off, I knew I could save them for a rainy day.
Or a hot 100 degree day. 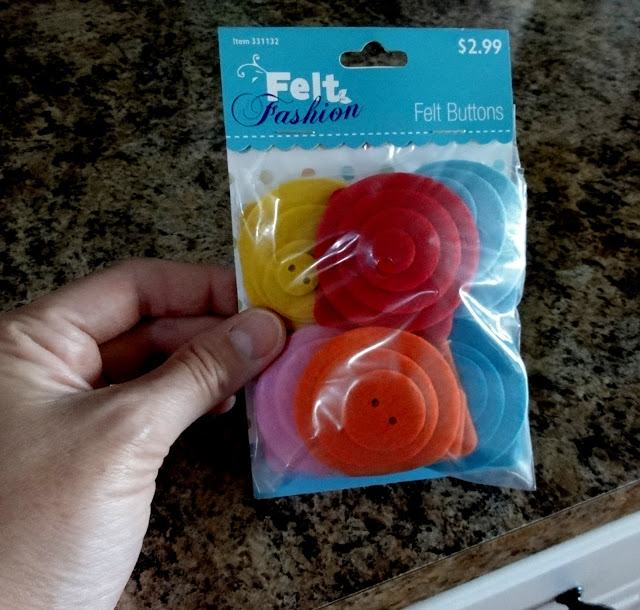 Oh by the way, here is the drawer after the mod podge dried.
I am still an amateur at mod podge.
As shown by the wrinkles I leave behind.

And can we talk about this knob?!?!
I saw it in the bins at Hobby Lobby and immediately it made me think of an old farmhouse door knob.
I loved everything about it.
But of course, there was no price tag on it AND there was not another in any of the bins.
I took it to the front and the sweet cashier said she would give it to me for three bucks!
Oh and I decided to mod podge the inside of the drawer too because I had extra paper and the insides were pretty grody even after scrubbing and scrubbing.

I got out my glue gun.
Assembled the felt buttons.

And glued them to the drawer!
Ignore the hot glue boogers all over the felt.
They are gone now.
I just was so excited that I took the picture right after I glued it on.

Thanks to Pinterest, I am now in love with chevron and these two colors.
Oh and the gray I am painting the nightstand.
I would never have thought to put all these colors together if it weren’t for Pinterest.
I didn’t have one pin in mind but rather all sorts of pins I have seen over the past year.

And here is the new nightstand! 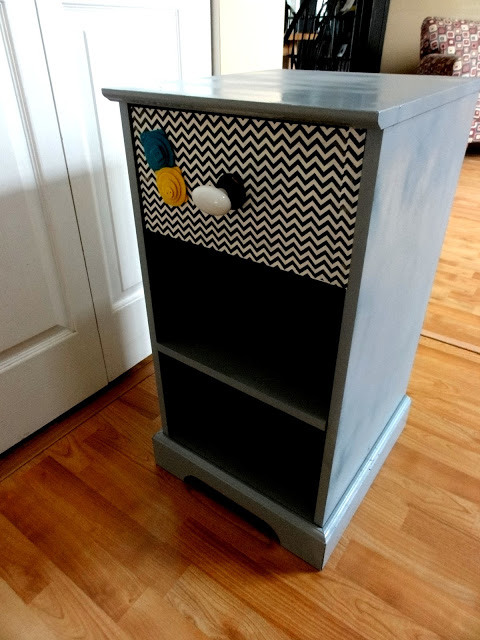 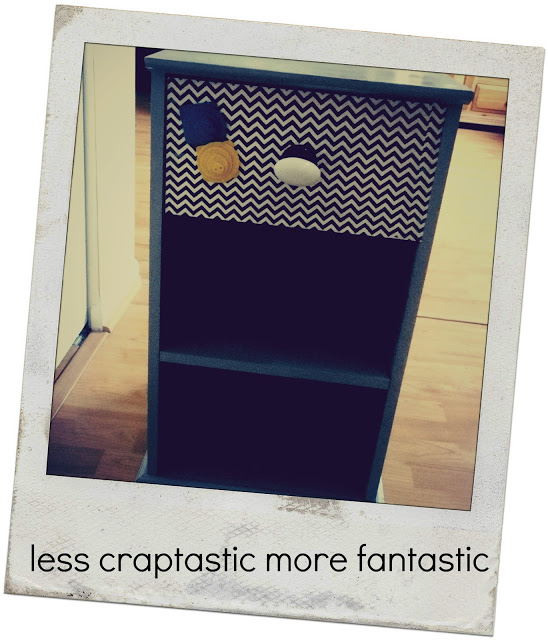 Here again is the before picture:

And here it is after:

Here is the cost breakdown: 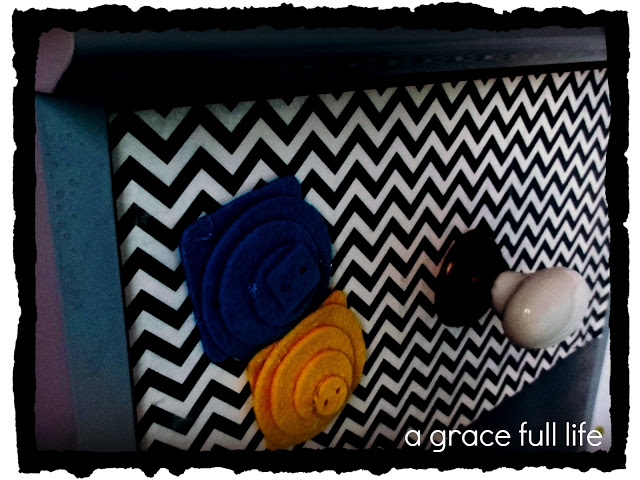