May 12, 2014April 25, 2020 Writer McWriterson
I recently migrated my blog and some of the pictures didn’t make the move. So imagine pictures where captions are.

I started this post in January.
This is the accuracy and speed in which I operate with larger tasks.
I make lists, I write on the calendar PAINT THE COFFEE TABLE in big RED letters.
Then I cross it off and add it in later.
Think four months later.

I really have nervous energy to thank for this project getting done.
I finished this the week before Listen to Your Mother.
I was so antsy, sweaty and nervous poopy that I decided that THIS was the week that ALL of my projects I was putting off were gonna get done.
Because the week after would be back to grocery shopping, making construction paper books at the school and eating mass quantities of carbs.
No time for coffee table painting.

I am all about self-deprecation here on my blog.
Keepin’ it real.
I forgot to take a before shot of the coffee table.
I swear I thought I did.
That is the scary thing.
Used to be, before I even bought a can of paint or a power tool, I would take a picture of my intended victim just in case I needed to document it for the blog.
It’s like I don’t even know who I am anymore.

I had to go on my own blog and look for a picture of my old coffee table.

And then save it to my computer.
From my own blog. 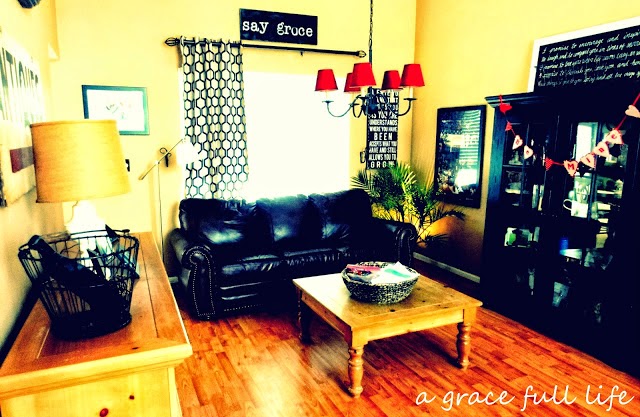 It is a great table.
My mom and dad got it for me and my then-husband.
I always like to joke that the furniture was a lot stronger than the marriage.
Heh heh.
I will be here all week, don’t forget to tip your server.
And try the veal.

Anyhoo, I have had this table in my possession since around 1997 or 1998.
It has held up great until last year when one of the legs started coming unhinged.
In fairness to the coffee table, my children have at one point or another stood, danced, or put heavy objects on this fine piece of furniture.
I don’t usually let my kids stand on my furniture but come on, they are kids and I don’t have eyes in the back of my head.
They don’t need to know that.
My oldest used to sit on this table and tie her shoes every morning.
In 2011 I found my then three-year-old standing on this table wearing nothing but a smile and Chef Boyardee all over her face and neck.

I have colored lots and lots of Care Bears coloring book pages on this table.
I have placed mugs and mugs of hot chocolate on this table while watching everything from Friends to Gilmore Girls to Real Housewives.
Without a coaster.
Shudder.
This is why I buy “distressed” furniture, people.
Because we are “distressed” in this house.

I cannot get rid of this piece.
It is one of my favorite pieces in my home.
So when the leg started falling off, I begged the hubs to try and “fix” it.
He “glued” it.
I say “glued” it because I honestly think that all that is holding it together is some special glue at Home Depot and a silent prayer.

When I decide to take on any kind of home project, I usually have an idea deeply ingrained in my head about what I want to do.
And usually, that idea is put there by Pinterest.
I had seen several cool paint techniques on that time-suck of a website.
But I am not good at things like chalk paint.
Or regular paint.

So I decided to go out on a limb and just trust my instincts.
Which is code for “this is going to look like crap in six months”.
Back in January, I bought some white paint.
And some stain in the color Weathered Gray.
Then it sat in my basement for four months.
Before I finally got up the courage and energy to pick up the paintbrush.

I put three coats of stain on the top of the table.
That took me six weeks to do.
No, not because I wanted it the stain to “set”.
Or because I am a perfectionist.
Because winter/spring is haaaaard.
And the table was in the basement and the fumes, THE FUMES.
I had to do one coat, turn on the big ole box fan, close the door and run.
I did worry if the fumes were dangerous to my family.
But it was so cold in the garage.
So, so cold.

OK, so I wanted the legs to be a different color.
Which made me sigh a big sigh because that would mean accuracy.
And tape.
And being careful and not being messy.
Something I am not at ALL good at.

But I was determined.
I wanted MY table to look like those fancy tables of other capable and much more talented DIY bloggers who will remain nameless.
COUGH CENTSATIONAL GIRL.
So last week, I went into the basement and pulled out my Valspar white paint I bought back in January.

See that circle in the middle of the can?
That is “paint”.
When “paint” is mad at you.
Is taking a stand.
Is proving a point.
That if you take “paint” for granted and ignore it for four months that “paint” decides it won’t be there for you when you show up.

I had a whole can and a half of Hotel Vanilla spray paint in my garage.
Just waiting for the right time to be all like, “Yoo-hoo! I am available! And you don’t have to take me to dinner and woo me!”
“I am easy”.
Yes.
Yes, you are.

I think the table is smiling at me.
It looks happy, doesn’t it??

26 thoughts on “Coffee Table: The Sequel”