July 31, 2014September 13, 2020 Writer McWriterson
This was my first (and probably last) post to go viral. This post was originally written when I was on the Blogger platform and at the time, I had Disqus handling all of my comments. Then Disqus got all messed up at Blogger, so when they migrated over here, they ALL said Kari on them. So it looks like I commented on my blog 47 times. I thought about deleting those comments but then I decided to leave them because it just makes this post seem that much more random. 🙂
Side note-Huffington Post has a contributor section that is completely different than the “news” section that you are probably more familiar with. This is what this post is referring to.

When I started this blog, I had no idea what the Huffington Post was.
Was it even in existence in 2010?
See?
This is why no one asks me for advice when it comes to blogging.

This is what I have learned: apparently being featured on Huffington Post (HuffPo for short) is a good thing for your “numbers”.
Apparently “numbers” are good for your blog.
Apparently, your blog is supposed to “generate income”.
At least that’s what I have heard.
I wouldn’t know anything about that. 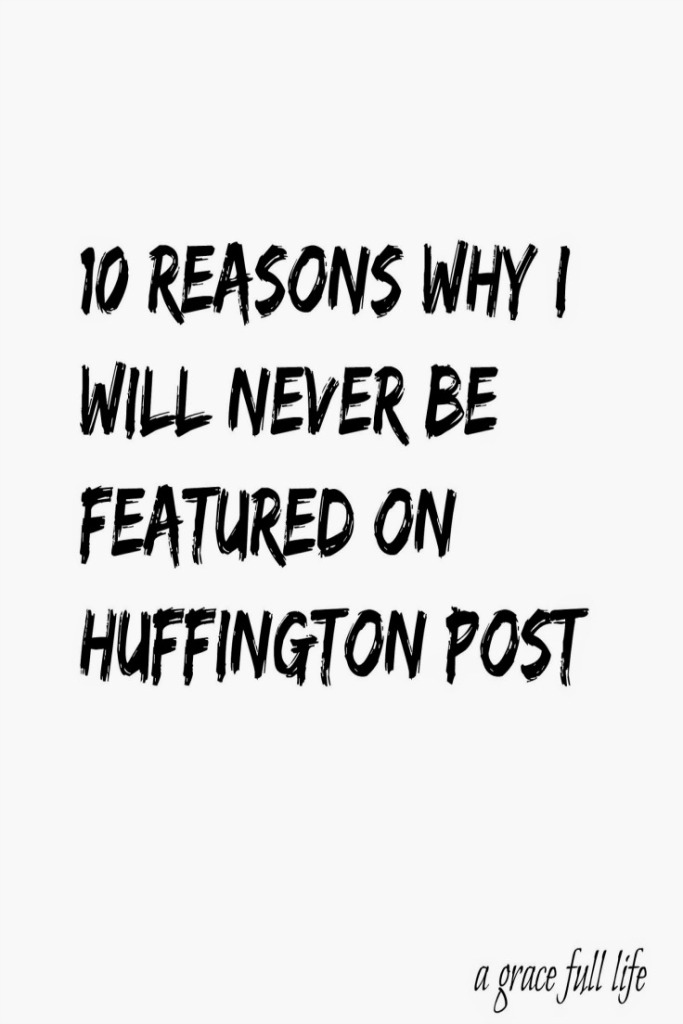 I love me a list.
I do.
More than anything.
It’s why I write this way on the blog.
Lists are fun, easy to read, and get shit done.
But I am terrible at creating 10 REASONS YOU WILL NEVER GET A SPOTTED DOG.
I am noticing a trend at Huffington Post.
13 REASONS YOU WON”T EVER FIND A MATE WITH THE FIRST NAME OF BETTY.
Lists are HUGE over there.
5 WAYS TO ENJOY CHOCOLATE AFTER HAVING A VASECTOMY.
This generation loves itself a good list.
15 WAYS TO END A RELATIONSHIP ON THE FOURTH OF JULY.
I mean, I am down with what they are throwing.
12 SEX POSITIONS THAT WON’T GET YOU PREGNANT.
But I am not good at the whole Buzzfeed-inspired list thing.
20 FAST FOOD ITEMS I DON’T GIVE A SHIT THAT HAS CHEMICALS IN THEM BECAUSE I WILL EAT THEM ANYWAY, STOP BEING A BUZZKILL.

Maybe I should be the title writer for the lists.

2- I am afraid of mean people. Especially the grumpy old troll, who lives under the bridge.

When you get published on “Huff Po”, a shit-ton of people will read your piece.
And when a shit-ton of people read your piece, mean people swoop in.
Some people call them “trolls”.
They “troll” the Internet looking to rain on a parade, poop on a head, pee on your sandwich.
For the simple fun of being mean.
I don’t know about you but I don’t like mean people.
In fact, I hear so many bloggers say “I must have made it into the big time! I got my first troll!”
NO.
NO NO NO NO NO NO.
I do not want to make it big.
I do not want a troll.

Never would I be excited to have a troll.
I am way too sensitive to be a blogger.
Maybe I need to go back to learning to needlepoint.

Psst, I never learned to needlepoint, to begin with, but the trolls don’t need to know that.

I stray away from controversial subjects because I AM AFRAID OF MEAN PEOPLE.
NEXT.

4- I have no idea how to submit anything to the Huffington Post.

I’ve heard so many people talk about getting “in” at Huffington Post.
You need to know a cousin’s stepmom who worked with your sister-in-law in college, during the lean years.
When they ate ramen together in Union Hall.
DOES NO ONE REALIZE YOU DON’T GET PAID OVER AT HUFFINGTON POST?
Yet, it’s like getting into Harvard to get a piece published
That is too much pressure.
But if you happen to have lunch with the cousin’s stepmother’s sister-in-law, tell her to call meeeee.

5- Did I mention that I am afraid of mean people? Refer back to #2.

Like THUS or HAPPENSTANCE or SUPERMARKET.
I also don’t use correct punctuation, my sentences are either run on or the exact opposite of run on.
Which is like, what?
Runoff?
I am the person who is yelling at my computer screen when spell check can’t find the right word.
I am the person who has to occasionally run to Google to look up words that people use in regular conversation.
I didn’t know what hyperbole meant until , , FINE, last week!
Did you know there is a blog with hyperbole in the title?
And I am a grown-ass woman who still doesn’t know what the word means, yes I said still. I hate reading.
Proof that I can never run with the “big dogs” of blogging.
Sorry to call big bloggers “dogs”.
Sorry to call famous bloggers “big”.
OMG, NEXT!

7- I don’t write about current events.

If I want to be taken seriously, I am told that I need to stop talking about balls.
Or poop.
Or tacos.
Or pooping because of excessive tacos.
Or writing about adventures the cardboard counterpart of myself is having.
But I don’t wanna stop doing that.
AND YOU CAN’T MAKE ME.

It’s too confusing.
And then I get all sweaty and headachy.
Back to needlepoint. Kidding, I still don’t needlepoint.

So I am pretty sure I won’t ever end up on the pages of the above but I bet if there was like a website dedicated to bloggers who love tacos and don’t know the meaning of hyperbole, who can’t needlepoint?
I WOULD BE A ROCK STAR.