October 6, 2014June 19, 2019 Writer McWriterson
I am always behind on trends.
I didn’t get into chevron for a good year after it became a raging success.
I never watch movies while they are popular.
I definitely don’t jump on the whole food bandwagon (what IS quinoa anyway??).
So it shouldn’t come as a surprise to those who know me well that I had never stepped into a Costco before this past month.
My parents have been bulk store shoppers for years, starting with Sam’s Club in the late nineties and now regular Costco shoppers as of the past three years.
They would rave about it, talk about the deals while sitting around the table eating brownie brittle by the handfuls.
That would be ME eating brownie brittle by the handfuls but I am sure they probably do too because of BROWNIE BRITTLE.
My sister in law would rave about the Greek pasta salad.
My friend Shannon even centered a post around the place.
All the while I would say, “I need to go to a Costco. Someone take me”.
But things would happen, plans would fall apart, and my meeting with Costco would never be in my future.
Until last month.
[spacer height=”20px”]
It has been two years since I have seen an eye doctor and as those who watched my Listen to Your Mother performance can vouch, I needed new glasses.
And apparently some allergy medicine.
You can see it here if it doesn’t come up on your smart device.

But definitely glasses.
This you need to know: I have been to four, FOUR different vision places in the past 15 years.
And they were just, eh.
It was time to get me in the chair again and so I Googled the best prices for glasses.
The first on Consumer Reports list was Costco.
That was the straw that broke the monkey’s back.
After getting some feedback on Facebook about Costco and their optical department, I was sold.

On a gorgeous September day, the hubs and I set out on a weekday for a date at Costco.
We were kind of giddy, I am almost embarrassed to admit.
Like we were going to a nightclub.
During the day. Shhhhhhhhh.
A big ole nightclub that has a room with just vegetables, smells like a mix of floor polish, shrimp and prosperity AND has samples of food at every corner!

Thinking back, nightclubs would do really well having a sample tray scattered here and there.

So the hubs and I were Costco virgins just waiting to become de-virginized.
I know there is a better word.
That I can’t use here.

At first, we liked it.
Not loved it.
Just liked it.
Like, yeah. It’s nice. I don’t get what all the fuss is about. It’s TOTALLY Sam’s Club.

It wasn’t until the second visit that we became Stepford Costco Shoppers.
This is what I think happened: our Costco microchip wasn’t activated until we walked in the door the second time.
Because they needed to process our information.
I am a conspiracy theorist so this is totally true. 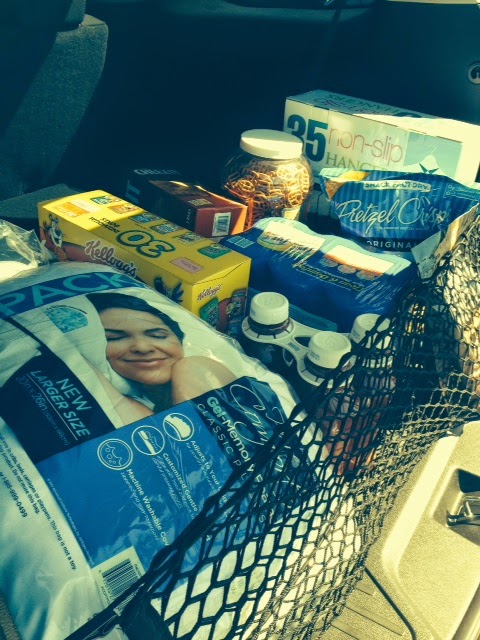 It was on visit two that I showed up for my eye appointment and long story shortish/kinda long, I fell in love.
With Allan, the guy who helped me pick out my glasses.
With the lady who checked me out in optical and gave me a topic for a Chicago Parent article.
With the BIG ASS APPLES the size of my head in the fruit section, that were individually blister packed.
With cans of baked beans the size of a small child.
With our cashier who looked like one half of Penn and Teller.

We drove into the sunset with our blister packed apples, socks by the pound and bellies full of Costco pizza (“What the hell do you think Leona really puts in that pizza? ?”).
Who needs Rome when you can go to Costco?

13 thoughts on “My Costco Virginity is No Longer”