Last week, I did something completely out of character for me, thanks to my husband, the risk taker that he is.

So, on the first day of my birthday week, last Monday, Mike and I took the day off to have a date day because he was departing the next day for a business trip for the rest of the week.

The plan was as follows:

Go to Paradise Pup for lunch.

Get some ice cream at Graeter’s in Northbrook, which is around the corner from this:

Basically, it’s the stuff that my wet dreams are made of.

Then, my husband tosses a curve ball my way after I wolfed down my 3 layer fries; why not pay a visit to Illinois State Police Headquarters, aka, Shermer High School.

Mike understands how difficult it was for me to stop posting the screenplay to the blog, and as a result, I hadn’t been talking about it (or even rewriting it) as much at home as I would typically.

In addition, my anxiety has recently been at DEFCON 5. Most likely because I haven’t been hanging out with Kate, Val, or Regina. Note to self- need to do more of that.

Birthday week couldn’t have come at a better time.

“Okay honey, I guess so. I mean if you really need to see it again, I’m up for it.”  was my response to driving by the former high school.

My husband pointed out the above sign on the way to the high school.

It raised the question of whether Bender Rd. came before John Bender. Or did John Bender arrive before Bender Rd?

You can’t buy this kind of lunacy.

Oh, look! The future home of the John Hughes Museum!

I made the fatal error of commenting, “I wonder what it looks like on the inside now?“, as we pulled into the parking lot.

“Let’s find out!”, Mike exclaimed as he pulled into a front parking spot.

Normally I would’ve said to him, “NO WAY! Turn the car around. Let’s go get some ice cream and fantasize about going inside. Maybe we’ll even tell people on Facebook we DID go. Shhhhh”.

But because it was my birthday week, my anxiety was already at an all-time high, and dammit, life is short. I said, “ahh, what the hell?” 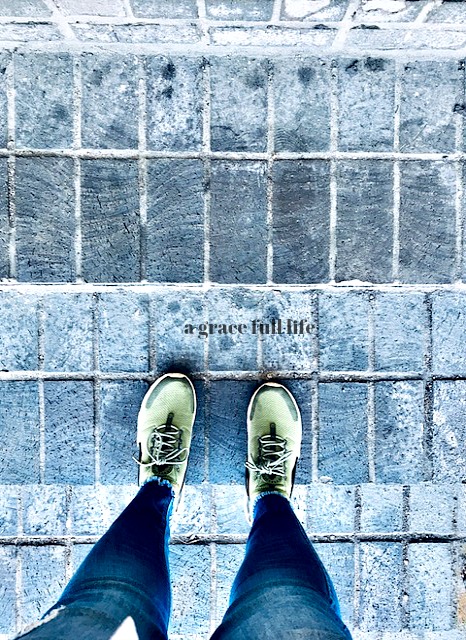 That’s my shaky legs getting ready to enter the building. I took this picture in case we were ejected or arrested, and I needed proof of our presence. I’m hoping for an arrest because WHAT A STORY THIS WILL BE.

Before I proceed any further, when we pulled into the parking lot, we noticed a sign in front stating that this was the location where Illinois lottery winners went to pick up their money.

I couldn’t make this up even if I tried.

I also cannot wait to work that into the screenplay.

Upon entering the premises, we were greeted by a middle-aged man in a security guard uniform asking us if we were there for the lottery.

Us- No sir, we just want to look around and take pictures.

Us-See, this building was used in a movie.

Security guard- Oh yes, I have heard that before!

Us- Have you ever heard of the movie The Breakfast Club?

Me- What about Ferris Bueller?

Us- Well, it was also filmed here.

Security guard- No kidding! Well, sure! Go ahead! I just need you to sign in.

Us- Looking around to make sure he was talking to us.

So there were several boxes of doughnuts piled up next to him on the desk, and Mike (being Mike), said to our new friend, “oh and we get doughnuts too??“

AND THE SECURITY GUARD SAYS “SURE! TAKE A BOX!!”

I COULD NOT MAKE THIS UP EVEN IF I WANTED TO.

We signed our names, grabbed our doughnuts, and walked down the hallways of the friggin’ Breakfast Club high school.

As we were roaming the halls in between classes, we came upon the winners of the Illinois Lottery sitting in a rather dismal waiting area. They didn’t look very winning; more like they were waiting at the DMV or waiting to get a root canal.

While attempting to avoid making eye contact with the lottery losers ahem, winners, I spotted my future friend, a female police or security guard (I couldn’t be bothered with details due to an anxiety attack). She was undoubtedly used to dealing with obnoxious lottery losers, as she looked very suspicious when we asked her what the story was here.

Mike- So lottery winners get their winnings……here?

Me (evasively darting the question)- OOH, WHERE DOES THAT HALL LEAD?

By chance, a lottery loser came up to her to ask a question, and we scooted down a corridor into the bowels of the high school even further.

See that person at the far end of the hall? We ran into him as we we entered this hallway, and I swear to GOD he looked like a teacher. He was dressed in a plaid shirt, wool vest, and a lanyard. He also looked at us very suspiciously (DO THEY KEEP THE DAMN MONEY IN THIS BUILDING FOR THE LOTTERY WINNERS??) which sent me right back to my high school days.

Suspicious “teacher”- Are you lost?

Me- I actually need to find a restroom.

ST points to the sign right next to me.

Me (giggling nervously)- Aha! Directly in front of me!

ST looking at us like the suspicious deviants that we are, then begins to slowly walk down that hallway where he is pictured above.

I went to the restroom and left Mike to wander around, but not too far, because I’m afraid I might end up in detention.

And by afraid, I mean excited beyond belief. 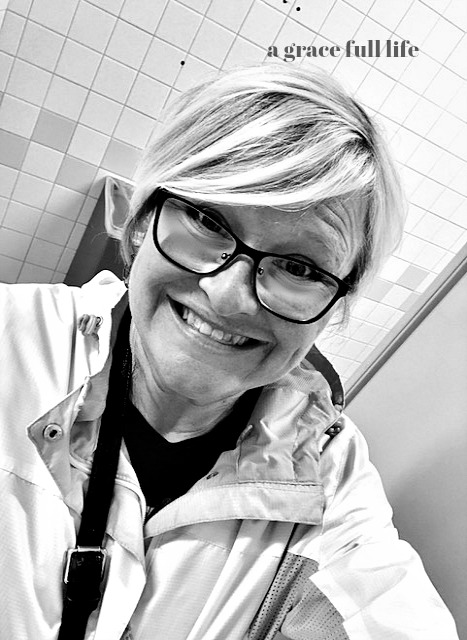 I decided (after washing my hands, of course) that I needed to memorialize the fact that I had just urinated in The Breakfast Club bathroom. Well, maybe not the only Breakfast Club bathroom, but one of them, because I KNOW Molly and Ally peed in here. I even looked for writing on the walls of the stalls even though I feel like Molly Ringwald isn’t a write on the bathroom wall with a Sharpie kind of girl. Ally totally is.

When I came out of the restroom, I noticed Mike nosing around the hallway. So of course, I told him about the selfie and he was all YOU’RE WASTING TIME WOMAN! Because of the salty old teacher at the end of the hall, and we needed to make our way around the other hallways.

First, there is no “library” in this building because they built the library for the movie was erected in the gym.

What we were really looking for was the classroom used in Ferris Bueller’s Day Off.

Which is never used, according to my new friend Cathy who works in this building.

Side note- Mike said over and over, “we need to find your friend, I’m sure she’s working!”

To be clear, we aren’t real life friends (yet), so I didn’t feel comfortable a) dropping in to see her, and 2) she might not even be working on this day, and C) she’s a 911 operator, so I am sure she’s not just sitting around waiting for two social misfits to waltz through the halls of a former John Hughes production so she can give us the nickel tour.

So Cathy, please don’t stop reading just because we didn’t come to see you on this day. Next time, we are coming with an invitation, a copy of my screenplay for you, and a box of replacement donuts for our new security guard friend.

As we headed down the hall directly across from the bathroom, we see doors leading to rooms that we are 45% certain were the rooms used in Ferris Bueller when I begin to panic.

MIKE WE CAN’T GO ANY FURTHER. HOW ARE WE GOING TO EXPLAIN OUR PRESENCE???

He’s all cool and collected, and I am literally vagina sweating, when suddenly we hear:

We turn around to see our female security/police friend from the lottery losers lobby, but she isn’t smiling.

Female officer- What are you two doing?

Me- Um. Okay. We aren’t doing anything bad, I swear.

Me- You know this building was used in a movie, right?

Me- Well, I wrote a screenplay and this is where I want the John Hughes museum to be.

Female officer gives me the side eye

Me- Oh don’t worry! You won’t lose your job, you’ll get a brand new office.

I don’t remember much else of what was said. I do recall Mike and I chatting with her, her laughing at us, and her snorting while telling us YOU AREN’T SUPPOSED TO TAKE PICTURES IN HERE. I also recall asking if we were going to be arrested, her telling us that the people in the lottery loser lobby had won more than $600, which didn’t make them losers at all.

Then she led us to an elevator, which I mistook for her gently escorting us out of the building as not to worry the lottery winners. We enter the elevator, and there are two employees join us, when they notice our box of doughnuts. We informed them there was a pile at the entrance desk, and that they should get some. They then CHANGED FLOORS and got off to get free doughnuts.

I couldn’t make this up if I wanted to. It’s as though John Hughes was directing this entire visit from Heaven.

We get off at the lowest level and our new friend leads us to this:

The exact poster that my friend Cathy shared with me.

Did you know that two Michael Jordan commercials were also filmed in the building? You do now.

I turned around and hugged my new friend, possibly telling her she’d be cast in the movie.

She laughed heartily and waved goodbye, pointing to the exit.

“Let’s take a selfie in front of the steps with the doughnuts!“, I suggested to Mike.