I’ve been on and off of the low-carb train for the past year and a half. I originally started last year after failing yet another Weight Watchers attempt and realizing that I was actually gaining weight WHILE on WW.

This should come to no surprise to those who actually know me know me or to those who’ve read this blog for more than a year.

How I got started on the low carb thing shouldn’t surprise you either.

I was perusing Pinterest one night while awake with menopausal sleep disorder (it’s a thing, I am sure), and found a pin suggesting low-carb and thought about why I hadn’t ever tried this kind of diet.

Oh sure, there are many other things you can’t eat on a low-carb diet, but bread was a deal breaker for me which is why I had never tried it.

The Atkins Diet became all the rage back when I didn’t have to think about my weight.

I am very lucky that for the first 35 years of my life, I didn’t need to worry about NOT having to eat bread.

I was my own brand of skinny for the first 29 years of my life. Meaning I was never supermodel skinny (and who wants to be?) but rather a comfortable weight that didn’t offer me any kind of health issues.

Then I had a baby and put on some weight but it fell off after a baptism weekend that put me over the edge enough to get me to start smoking again.

Nicotine is THE best diet EVER.

Side note- the author of this blog doesn’t advocate for smoking to lose weight but damn girl when you smoke, the pounds fall off.

As do your lungs.

It was after the birth of my second daughter that I could never get a hold of my old weight again. It was never usually a problem until I hit the menopause portion of my life aka you’ll never look good again portion of my life.

Then after receiving the news in July that I really need to be on a low-carb lifestyle to save my life, I decided to stick with it for good.

First, let’s get this out of the way: keto vs. low-carb.

Keto = less than 20 grams of carbohydrates per day.

Low carb = less than 50 grams of carbohydrates per day.

I think you already know that I am not now nor will I ever be in ketosis (aka keto).

If the doctor said I have to, I would be all NICE KNOWING YOU, I HAD A GOOD RUN, WANNA HIT PANERA AFTER THIS?

So I needed to make some changes so I could live with myself and also, just, you know, live.

Also, I know there is some controversy about the whole low-carb/keto lifestyle right now. It was suggested by my doctor that I do this diet temporarily to get my numbers in check. This is not something I am going to be doing the rest of my life, THANK GOD.

Cauliflower will be your best friend on the low-carb craze wagon.

Did you know that cauliflower can be used for pizza crusts? In place of things like rice? Can be used as a substitute for buffalo wings? Do you also know that it still tastes like cauliflower?

But when you can’t have rice because they have death carbs in them, you will decide that cauliflower (as well as broccoli) is the best fucking thing on the planet.

Sad this getting old crap, isn’t it?

So one day I was voraciously looking throughout my local grocery store’s produce section for magical cauliflower that turns into a chicken when I saw this:

But I was really hungry for something other than eggs, meat or cheese, so I decided that I would give it a shot.

All you do is saute the veggies that are in this bag, then I added some chicken, soy sauce, garlic salt, and pepper as well as an egg and it was really good.

Like better than I ever thought it would be.

I am proud to say that I came up with this myself but honestly, it’s been done before.

Take raw or cooked frozen shrimp, a bag of stir-fry veggies, butter, and salt and pepper, if you want an easy dinner.

Or for an even better dinner, try fresh veggies instead of the frozen crap, and ghee (OMG GHEE IS THE SHIT). as well as some oregano, garlic, and salt/pepper.

SO AMAZING and low-carb.

Now fruits are another story because those little buggers have sugar in them.  I was ordered to eat only berries but I can’t live on only berries like some granola eatin’ freak, so I sneak in a grape or six here and there and come fall, I will be eating Honeycrisp apples, death be damned.

One more tip: when calculating carbs use that beautiful dietary fiber to your advantage.

For example: let’s say you have a product that has 8 grams of carbs but also has 4 grams of dietary fiber. Subtract the dietary fiber from the carb count and you have your total carbs = 4 grams.

I want to make sweet love to dietary fiber.

Also, you won’t poop much on this diet because of the lack of fiber and also the massive amounts of cheese.

So eat your dietary fiber. Or you won’t poop.

Sew that on a pillow.

For this recipe, I used my favorite low carb bread, Healthy Life 100% Whole Wheat, which only has 11 grams of carbs (after subtracting dietary fiber) in two slices. That isn’t bad considering I get to have bread. I would give up lots of other stuff to eat bread, so I love that I have an option on this diet.

So with the tuna melt, I took a can of tuna, added mayo, onion, celery, salt, and pepper and blended together. Then preheat the broiler on your oven, while you put your bread into the toaster (I know, trust me on this). After the toast pops up, spread your tuna salad onto both pieces, then top each piece with a slice (or shredded or thinly sliced from a brick) of swiss cheese.

Place on a cookie sheet and stick in the oven for about 5 minutes while watching to make sure the cheese doesn’t burn.

Toasting the bread actually makes this recipe even better because otherwise, the bread will be soggy.

By the way, Pinterest will be your soul mate when you are on any kind of diet but I have found more low-carb/keto recipes that are out of this world there than any other place.

Click on the board below if you are too tired to get off the couch from no sugar in your diet to look for your own recipes.

I found the following recipes that I use regularly, on Pinterest.

Pizza in a Bowl

Because of death crust, you will no longer be able to enjoy pizza the old way so why not say SCREW YOU to pizza by eliminating the middle (ahem, bottom) man and putting your pizza in a bowl.

Which is really a soup or casserole at that point but don’t argue with the keto Gods. Trust me. They’re hungry.

This fish saved me one evening in August. I had been missing fried food because of RED ALERT! RED ALERT! THERE IS FLOUR IN THAT! STEP AWAY FROM THE FLOUR!

But seriously, I can’t live without fried food. It’s like in my owners manual of the top five things I need so my engine doesn’t overheat. For real. I’m not making this up.

Thank Heavens I found this recipe on Pinterest one long low-carb day when I was in one of those keto flu phases because my body wasn’t getting my usual 1,500 grams of sugar per day.

Try this and you may never eat fried fish any other way. 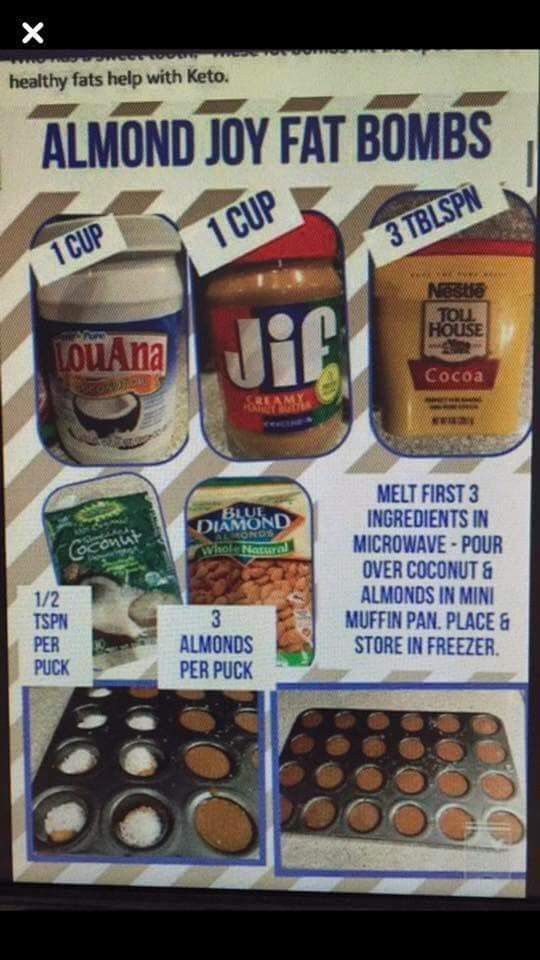 Let me just tell you that these things taste like Almond Joys but not as sweet because if we’re being honest, low carb sweets taste like sweetened cardboard. But this recipe is so damn good, you’ll feel like you’re cheating.

If I had to give one answer to surviving low carb the answer is eggs.

Thank you, sweet baby Jesus for the eggs.

So I have learned that if I am creative with my eggs, I can survive this dreadful lifestyle.

And I am still alive, so I make all of the eggs all of the damn time.

I created pizza eggs because pizza will kill you.

No, it won’t but to be safe, I need pizza eggs.

But it’s better than nothing and right now I need pizza eggs.

I can’t believe this is my life but here we are.

Well, without the actual hash. So corned beef cauli?

It doesn’t taste anything like hash browns but we are still alive, aren’t we???

So far so good although I have fallen off the bandwagon once.

It’s hard to be low carb all the freaking time.