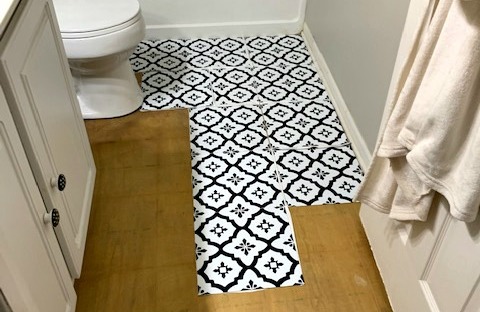 It all started back in 2012 when I was tired of looking at this:

The above is a kid’s bathroom for two girls, ages 12 and 4 at the time (SOB). But it was ugly and I wanted a prettier bathroom for the girls and because of that, we decided that we needed to update our bathroom as well.

Yep, we redid two bathrooms in less than one month.

Here are the afters: 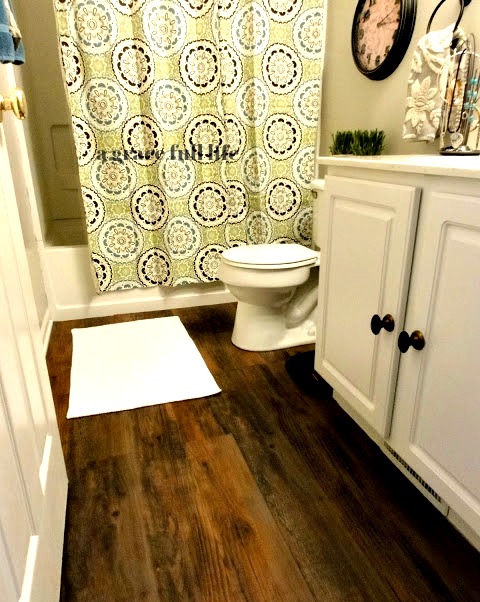 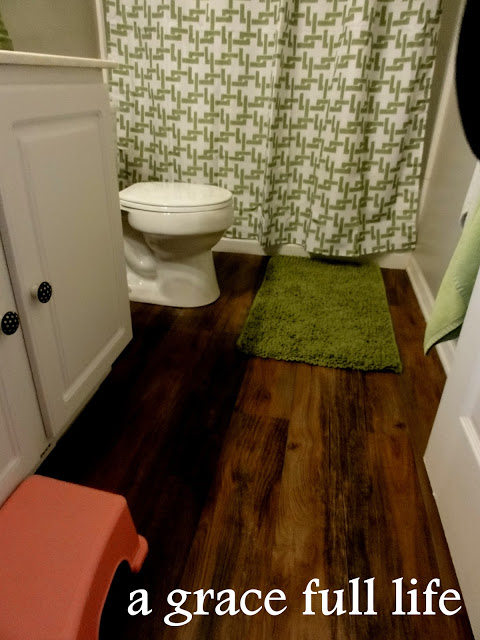 But the floors were the real star of the show because back in 2012, peel and stick “wood” floors were pretty much unheard of.

Which is why my posts about the peel and stick floors kind of went viral.

I can’t give you specific numbers because I am not that kind of blogger (ie-someone who knows what in the hell they’re doing). Also, I since have moved my blog two times, so the numbers don’t accurately reflect how many page views they have received since 2012.

But let’s just say that since moving this blog to its current location in July 2019, I have had 3,000 page views for the master bath post alone.

So when this happened to the beloved viral floors in 2018:

I was kind of devastated.

Nail polish remover and laminate floors do not mix.

I couldn’t even get mad because this is something that could’ve easily happened to me. I was more upset that I didn’t have any more planks leftover in the basement. See, because this was six years later and Marie Kondo had come into my life somewhere between 2014 & 2018 and extra “wood” planks in my basement were definitely not giving me joy.

DAMN YOU, MARIE KONDO! (shakes fist in the air)

So I decided that we were going to go another way. I wanted the printed tile that was all over the blogs, Instagram, and Pinterest.

But as pretty as they are, they were hella expensive.

For a solid year and a half.

I just shoved a rug on top of the warped and distorted floors whenever we had company and told the girls to tell their friends that we were “rehabbing”.

For a solid year and a half.

Then, a few weeks ago while online Christmas shopping, I found these: 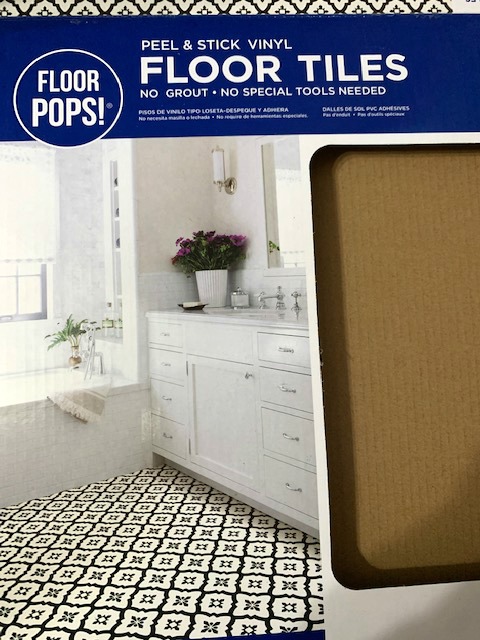 FloorPops Comet Peel and Stick Floor Tiles on Walmart.com (not an affiliate link, just want you to get a good deal too).

Now, I have bitched about Walmart before and even took a hiatus from shopping there for a long while. But I have one kid in college and another who rides horses like she’s getting paid to do it (she isn’t), so I need to save money.

We are bleeeeeeding money. So anywhere I can save it, I am down.

Plus, those floors needed to be replaced. So it was a need, not a want!

AND THEY WERE ON SALE!!

Like, 60% off what I had seen for these same kinds of peel and stick floors before.

And I have Rakuten (formerly Ebates), so we earned 10% cashback on these bad boys so it was like they were paying me to redo my floors!

We measured the girl’s bathroom and decided how many packages we would need: eight total packages of tiles as each package had 10 tiles with the total square footage (per package) being 10 square feet.

Is your head hurting yet? Mine too.

After recovering from all that Math-doing, ordering them online, and then waiting a week for them to get here, Mike began demo-ing the old floor in the girl’s bathroom.

See the old linoleum under the peel and stick? The shiny you see is the old adhesive from the “wood” floors. So he had to remove the linoleum as well and go down to the subfloor.

Which was good because it turns out there was some mold under there:

It took several days to get rid of the mold and I am glad we did get the old linoleum up because who knows how long that mold had been there. The old linoleum was original to the house and was built in 2000. Also, some of that black you see was instead the builder adhesive they used to affix the original linoleum to the subfloor, to our relief.

After talking to several people at Home Depot and reading online, we learned that we could apply the peel and stick to the subfloor. Now, how long will this last? Time will tell because we didn’t use builder grade adhesive. Just the peel and stick adhesive on the back of the tiles.

I will keep you posted though, don’t you worry.

So the best way to start these kinds of projects is to lay them out ahead of time to see how many tiles you will actually need. In our case, we also need to allow for user error and user error (especially when I am involved) is a higher percentage than most.

Then after doing more Math SIGH, we realized we were going to end up using 3.5 packages of tiles per bathroom.

Now, we have very small bathrooms which work to our advantage for projects like this. In fact, it was during both of the flooring projects (in 2012 and 2019) when I was actually thankful for small bathrooms.

Now, talk to me when I am getting ready in the morning and everything falls off of the counter and into the ding-dang sink.

Also, if I see one more House Hunters episode where they complain about having only one sink in a master bath, I am going to cut a bitch.

The toilet was the hardest part because of all those corners. So many crapper, shit, and poop jokes, I don’t even know where to begin, so I won’t.

This time around, we had this fella:

Buddy has the keen ability to know when is the absolute worst time to want to play. Good thing I was just watching Mike do all of the work, cracking jokes to keep the mood light, and taking occasional pictures so that I could indulge our doggie.

WHAT? BUDDY NEEDED ME!

He got new jeans after this project. I know you were worried.

It took all of about two hours and this was how it looked afterward: 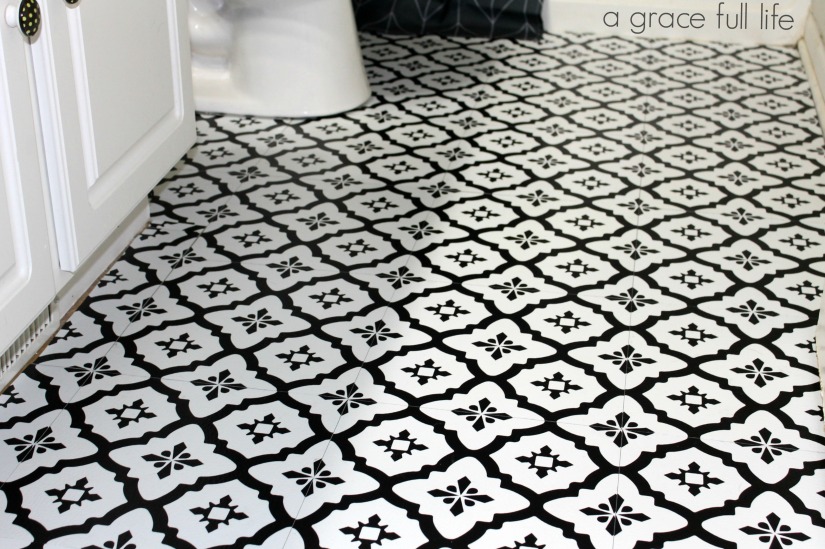 We also got new shower curtains because the old ones clashed with the new floors and also, the old ones are seven years old and it was probably time to change them out.

Yes, I washed them in the seven years I had them up.

So, I recently read about how buying an extra long shower curtain and raising the rod (RAISE THE RODDD) helps to make a small bathroom look bigger.

So I ordered them (size 72×96) as well as long shower curtain liners.

Here is the before and after: 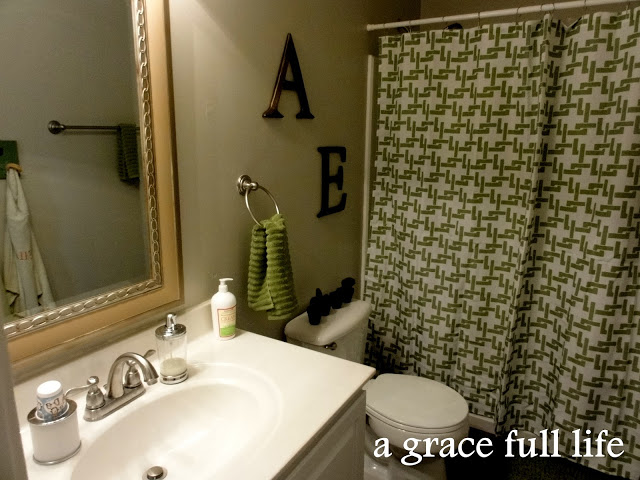 It’s kind of hard to see but it looks so much bigger in this room. Bigger than I ever thought this room would look. But also I love that when you are in the shower, it seems so much more private. Also, it totally feels like a fancy hotel bathroom.

Another tip for small bathrooms, especially those that are interior and don’t have windows: LED lightbulbs! These have been LIFE CHANGERS in our bathrooms. We’ve been using LED lightbulbs in all of our bathrooms since last winter and it was the best decision ever.

On Thanksgiving morning, my husband tackled and finished our bathroom. We didn’t have any mold in our bathroom…..probably because adults use the shower and toilet in this one.

Here is the before:

I never thought we could improve on the floors that we installed in 2012 but this is by far my favorite DIY project we’ve done in our home. 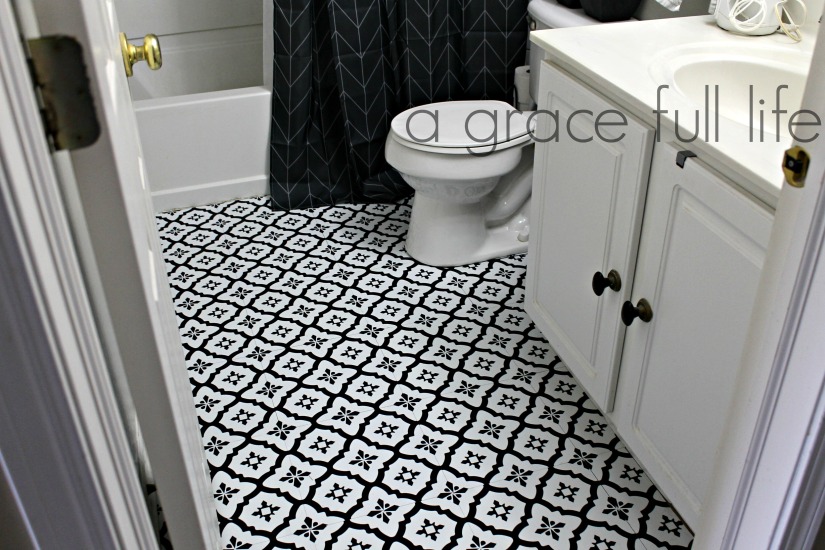 I do need to mention this because the old floors were shared on my Hometalk account a few years ago and I got lots of questions about renters and floors. I don’t know how I feel about using peel and stick for rental properties after seeing how they pulled up with this project. If you own your home, then, by all means, do this project. But if you have to remove it before you leave, you may want to consult with your landlord because depending on how long you intend to live there, it might be a hot mess when you try to pull them up. 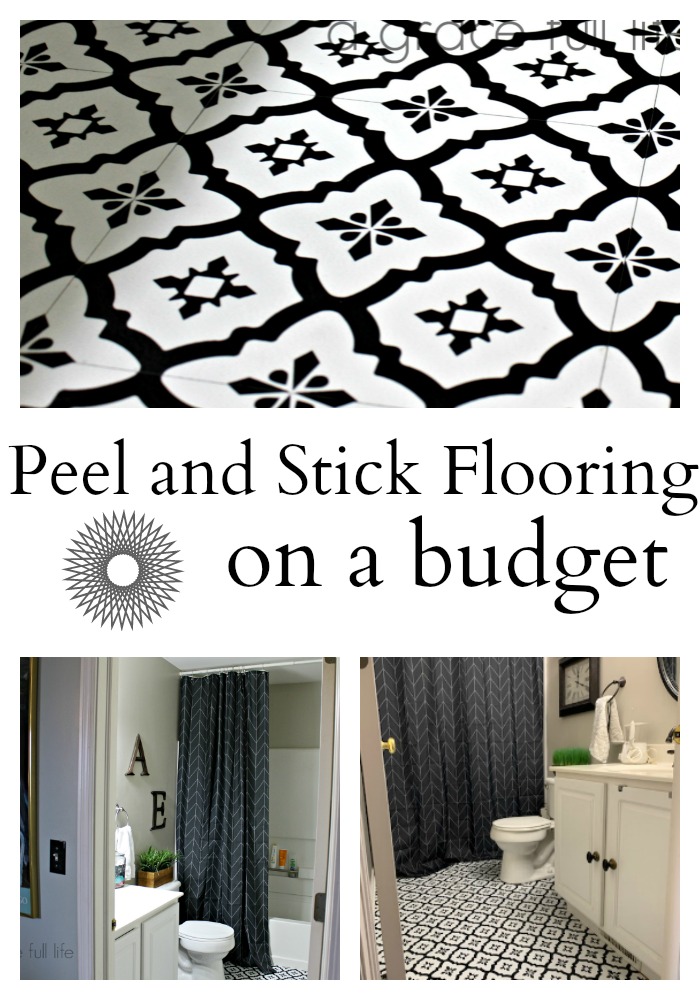 Otherwise, this was such a great and easy way to makeover a bathroom, especially an underwhelming bathroom.

That was a subtle poop joke.