When we first moved in, our walls were builder-grade white walls, never painted.

The walls were chalky, rough and just white.

So the following spring after moving in, we decided to paint all the walls at the lower level.

My mom told us about a very popular neutral, Peanut Butter by Behr, and we instantly fell in love with it. It was the perfect color for our blah home, just what we needed to make the walls pop.

By the way, I wrote a post about all the before’s and after’s in our home back in 2011. It makes me laugh because every room has changed in color since that post with the exception of the family room.

The peanut butter color lasted us through many years of life but after 10 years, it was starting to show its age.

Scrapes, gouges, and huge chunks were missing from the wall.  A few years ago, my husband did try to touch up the paint but it ended up making it look even worse. 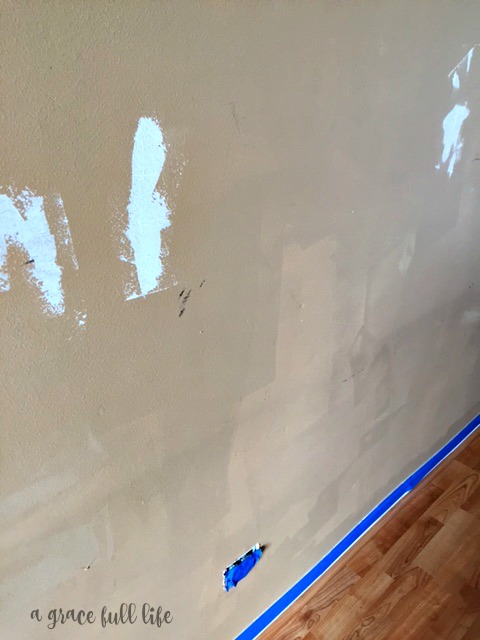 Can you see the old paint vs. the touch-up? It really wasn’t his fault, the paint had faded and in trying to make it look better, the new paint actually made the old paint look even worse.

But we were desperate because painting this room was not easy. CATHEDRAL CEILINGS, Y’ALL.  We had dreaded having to re-paint this since the first time we painted.

Until we saw the writing on the wall. Literally.

Stains, fingerprints, pencil marks, food, drink, vomit, blood…you name it and it was on our walls.

At one point, I made the fatal error of trying to use a magic eraser to get rid of the stains. That only seemed to make the problem worse. It was within the first three years that we realized flat paint was very bad and the peanut butter color was making it even worse.

When people would come to visit, I would say ….excuse the dings and dents, we are living life here…..but secretly, I wanted these walls to go away.

But there was this wall:

As you can kind of see, we started this in August of 2005 to document Anna’s height. It was the perfect wall to do the measuring and we wanted to set up roots here. This was our home, so we shall measure you on the wall for all eternity. After Ella was born, we continued the tradition because of roots. Alongside the heart-tugging measurements, you can also see the touch-up paint as well as the magic eraser swipes and pen marks,  but this wall man.

Then this summer, I started noticing that Anna’s teenage friends were also marking their height on the growth chart as well as some friends of ours who came to stay with us. This wall was full of memories and I wasn’t about to get rid of it.

But first a new color and for that, I blame Joanna Gaines from the HGTV show, Fixer Upper.

She comes off all sweet, kind and I love Jesus and all but deep down to her core I know she is evil.
Because it is her fault that I even wanted to paint these damn rooms in the first place.

If you have never seen the show Fixer Upper, do not start now. I REPEAT, DO NOT START NOW.
It will suck you in and you will never be the same.
You will want things like farmhouse sinks and stuff called shiplap ( I still don’t know what in the hell it is but I must have it), you will want dark wood floors and barn beams and light gray walls.
DAMN YOU JOANNA GAINES! DAMN YOU!!!!

I was perusing Pinterest after being up in the middle of the night because of middle age urinating when I found a pin that showed me ALL OF THE PAINTS JOANNA GAINES USES.
In one handy guide, thank you very much Pinterest.
And there was one color that kept on popping in my feed over and over and over.

This is Joanna’s favorite color for family rooms…..

This is what Joanna would pick for a cozy bedroom…

I’m convinced that “shiplap” is a Christian swear word that Joanna Gaines made up so that she could hear people use that word all over television, read that word all over blogs and Pinterest and laugh her 90-pound ass off when it’s used wrong in a complete sentence.

Holy shiplap, I said to myself, get me that paint color!

Being the minion that I am, off I went to the Sherwin Williams store to get my paint swatch and in my husband went to Home Depot to get the paint.

We decided, our home was going to be Joanna-fied for shiplap’s sake.

My dear friend Rebecca offered to help us on our first day of painting. That is a good friend, by the way. Because painting is hard work and doing it for your own satisfaction is quite different from doing it for somebody else’s.

Rebecca is the shiplap.

Bye-bye Peanut Butter by Behr. You were good to us for many years but you are starting to look like shiplap so it’s time for a change. 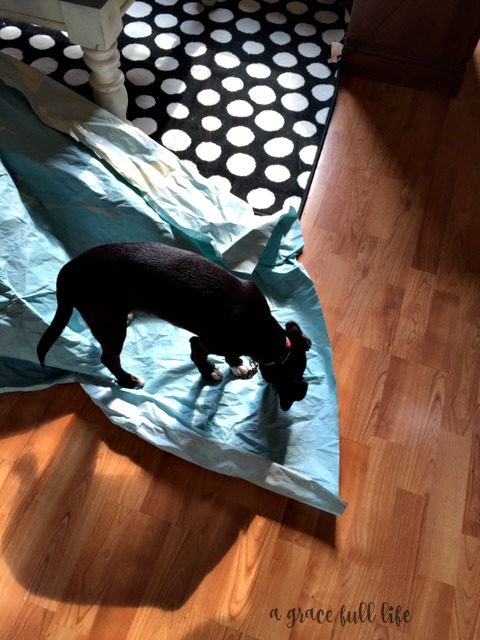 I should also mention we had another helper as well. I didn’t take a picture of my best friend painting but of course, I took a picture of the dog. Because I am one of those people now. Shiplap……

Being no Joanna Gaines myself, I thought Silver Strand would be more silver. Duh.

It turns out it is a blue-gray which means in a different light it looks completely different.

Light blue in one area.

And silver-blue in others. 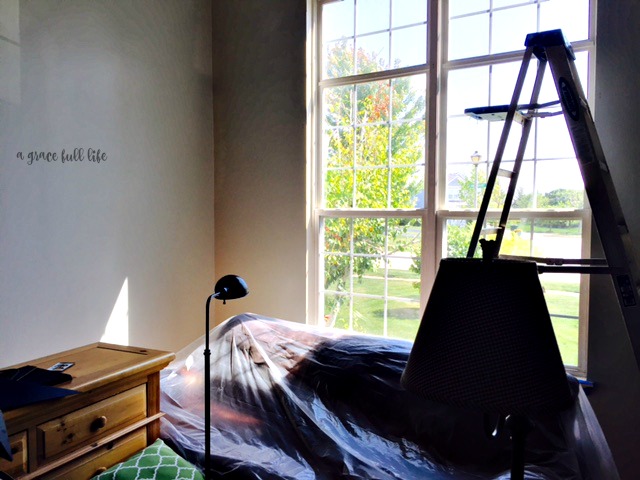 But with every coat, I was loving it more.

It took us three days total to finish this paint job, a lot shorter than we imagined because we had Rebecca’s help the first day.

By the way, she had a great tip for us: freeze our paintbrushes so we wouldn’t have to rinse them out each night.

This saved us so much time!

Simply put your brushes in plastic Ziploc bags, seal to get out as much air as possible (you can’t seal the bag all the way) and put in the freezer with your fish sticks.

The next day, we opened the freezer took the paintbrushes out and immediately began to paint.

And three days later, this is what it looked like:

Even at night, it looks so much brighter in here!

And on a cloudy day!

Didn’t touch it. And it totally works with these colors.

I guess a thank you is in order for Joanna Gaines.

Thank you for making our home look less like shiplap.

24 thoughts on “I Cheated on Peanut Butter with Joanna Gaines”