I love this story so much and hate that it is buried under four years of writing, which is why it is being reblogged today.

Ten years ago this month, my daughter and I got married to my husband in a barn.
I have talked about it here before and since I don’t really want to rewrite that post, head to the link if you’d like the backstory.
Our wedding was held in a historic barn from the 1800s that was moved down the road to the site where it sits presently, and on the day we got married in 2006.

The barn isn’t that particularly nice to look at from the outside as far as barns go. I mean it isn’t ugly but I have seen more charming barns in my day and this one just isn’t one of them. The above picture was taken at a really flattering angle, as to make it look a lot better than it does in real life.
Kind of like pictures of myself.
So I can relate to this barn, completely.
Okay to look at on the outside but on the inside, it is pretty awesome.
It was the inside of this barn that hooked us.

You can’t recreate stuff like that in a plain beige reception hall that serves veal for 85 people.
We knew right away that this was the place and booked it immediately.

Our wedding day came and was perfect in every cliched way.
I know everyone says that, but man, it really was.
We had an intimate gathering of our favorite family and loved ones surrounding us in this barn with simple candlelight, lots of raucous music, and so much laughter.
It was such a magical night.
So magical that you could hear many a slurred sentence echoed in the barn parking lot of “MIKE AND KARI NEEDSSSS TO GET MARRIED EVERY MAY! 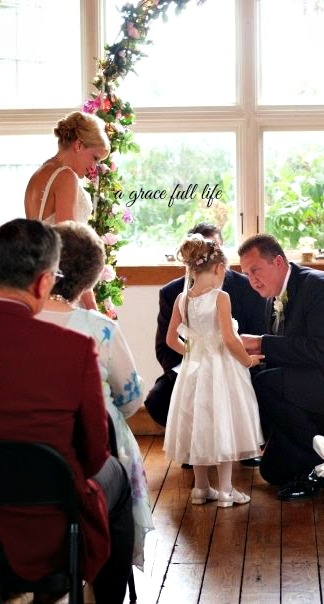 It was as we were blowing out the candles, loading up the boxes of decorations and picking the bobby pins out of our heads, that my brother witnessed something very sinister going on in the parking lot.
Two of our dear friends/wedding guests were stumbling to their car while carrying under their arms a wooden bench that had sat right in front of the barn and was shoving it into the trunk of their car.

It was the following day, somewhere in between the casual breakfast at our house and the afternoon BBQ/video presentation when my brother casually mentioned to the group that, hey, did you know that Ted stole one of the benches out in front of the barn?

There have been a lot of changes in the past ten years of my life but the one thing that hasn’t wavered is my ability to freak out about virtually nothing of substance. The following words may have been uttered once learning that property from the barn had been pilfered:

WHY DO WE HAVE SUCH SHIFTY FUCKING FRIENDS?
THEY ARE GONNA CHARGE US FOR THAT BENCH, I JUST KNOW IT!
MIKE, DO WE KNOW HOW MUCH THOSE BENCHES EVEN COST?
DO THEY HAVE SURVEILLANCE CAMERAS?
DO YOU THINK THEY HAVE BARN POLICE?
THAT IS JUST WHAT WE NEED.
TO PAY FOR A BENCH WE DON’T EVEN GET TO SIT ON.

We eventually rationalized that it happened so late at night, most likely no one related to the “barn police” would have seen the incident occur.
Also, I don’t think there is such thing as barn police but I could certainly rationalize that point.
We waited for the final bill from the barn and no “bench removal fee” was on there.
We said nothing, paid our bill and went on with our lives.

Looking back, I did regret not saying anything to the barn, but we had accidentally left our flower arch there that Rebecca and I painstakingly worked on for an entire Saturday before the big day. I felt like it was an even swap because, in all honesty, that bench is really ugly. The barn people were probably even happy it was gone.

We were doin’ them a solid.

It was the good-natured taunting that started the following Christmas when we received a holiday card from the family who were the proud new owners of the bench, our shifty friends Amy and Ted.

To be clear, Amy and Ted are two of the nicest and fun (I mean, steal a bench at a wedding am I right?) people you will ever meet. I use the word shifty in jest and to piss them off because THEY STOLE A BENCH FROM OUR WEDDING VENUE.

But when they signed their names, their young children’s names and underneath it simply said “and the bench” on the Christmas card, we laughed.
And laughed and laughed.
Until we didn’t.
Wait a damn second!
We should be the owners of that bench!
That is our bench!
That bench needs to be on OUR Christmas card!

A few months after the Christmas card, my brother, his wife, my husband, and I were out to dinner celebrating my birthday. It was over a few birthday drinks that we came up with a plan that evening to avenge BenchGate 2006. We were going to get the bench back! That night! On the way home from dinner!

The four of us drove my brother’s pick up truck to our friend’s home and stole “our” bench right off their front porch that night under the cloak of darkness. We laughed and screamed, “WE GOT THE BENCH BACK!” as we drove down the streets of their neighborhood with our fists in the air. The rush, we all felt! I finally understood why they stole it in the first place and started to worry if a life of petty crime was in our future.

That evening began a several-year tradition of “stealing the bench” that went back and forth between us and the bench stealers.
One year, Mike and I stole the bench back while Amy and Ted were having a huge outdoor party. We casually walked into their backyard and started mingling with their guests and even had our friends make our drinks.

To be clear, we weren’t even invited to this party. Which then made us think, HEY! WE WEREN’T INVITED TO THIS PARTY!

Even more reason to steal our bench back, motherfuckers.

Everyone at this party was completely shitfaced which made stealing the bench ideal. I will never forget the visual of Mike and I hysterically laughing, holding our margaritas and carrying this bulky bench out of their backyard and down the street.

Nothing to see here! Just getting our bench back! You wouldn’t understand!

The tradition ended a few years ago when we put the bench in the basement and now that I think about it, I feel a little sad that we ended the tradition by unfairly putting it somewhere they couldn’t have taken it.
It was really fun, the whole back and forth. The waking up in the morning and saying, “SHIT! MIKE THEY GOT THE BENCH. AGAIN”.

Everyone in our lives got a kick out of the bench shenanigans including all of our children. We were teaching them all about thievery and sneaky tactics at a young age. It was quite a proud moment for us as parents.

Maybe we will put the bench in the backyard tonight for old time’s sake. And maybe we will even leave the gate open too.
Just kidding.
There is no way in HELL they are getting that bench back.

*The bench is back in the yard. Don’t tell Amy and Ted.